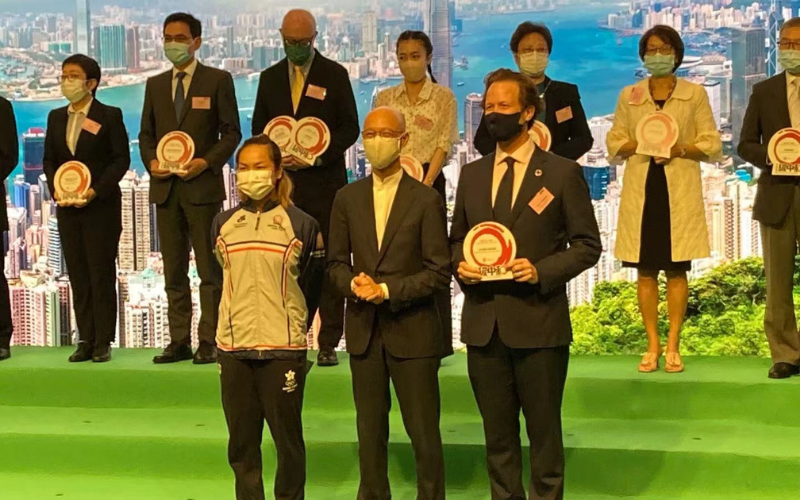 Speaking at the ceremony, the Chief Executive, Mrs Carrie Lam, said that the Government attaches great importance to deep decarbonisation for achieving carbon neutrality before 2050. Since earlier this year, she has been chairing a new Steering Committee on Climate Change and Carbon Neutrality to formulate the overall strategy and oversee the co‑ordination of inter-departmental actions. The Office of Climate Change and Carbon Neutrality will be set up to further promote full participation by the Government and the public in transforming towards decarbonisation. She added that in the next 15 to 20 years, the Government will devote about $240 billion to take forward various measures on climate change adaptation. She called on “Carbon Neutrality” partners to further deepen and accelerate their pace in pursuing low-carbon transformation, so as to set examples for different sectors in society and the public, drive the green economy, create more green employment opportunities and promote climate action.

In response to the Paris Agreement and to encourage different sectors such as large organisations to participate in low-carbon transformation, the ENB launched a “4T” partnership dialogue platform in 2016 to encourage partnering organisations to save energy and reduce carbon emissions together by drawing up plans under a “4T” framework, i.e. “Target”, “Timeline”, “Transparency” and “Together”. In 2016, about 40 “4T” partners took part in the programme.

The Secretary for the Environment, Mr Wong Kam-sing, said that the Government announced in early October this year Hong Kong’s Climate Action Plan 2050, setting out the vision of “Zero-carbon Emissions‧Liveable City‧Sustainable Development” and outlining four major decarbonisation strategies and measures, namely net-zero electricity generation, energy saving and green buildings, green transport and waste reduction, for achieving carbon neutrality. Moving with the times, the ENB has upgraded the “4T” partners as “Carbon Neutrality” partners. Besides energy saving and green buildings, the programme has been expanded to cover other aforementioned key decarbonisation areas. The ENB encourages “Carbon Neutrality” partners to set their targets and timetables to support renewable energy development, energy saving and green buildings, green transport popularisation, waste reduction and more, and share with the public their measures and outcomes to achieve deep decarbonisation together. About 60 “Carbon Neutrality” partners took part in the programme in this round, and initial data showed that about 70 per cent of them had set or planned to set carbon neutrality targets. The ENB will collect data such as targets and timetables from the partnering organisations later and update the overall progress of the “Carbon Neutrality” partners programme in a timely manner.

During the ceremony, the ENB also appointed Hong Kong cycling athlete Lee Wai-sze as the “Carbon Neutrality” Ambassador, with a view to enhancing public understanding of the impacts brought about by climate change, and promoting a green and low-carbon lifestyle. The bureau will continue to step up promotion and education on climate change to encourage participation of the whole community in pursuing deep decarbonisation. Hong Kong’s Climate Action Plan 2050 and its leaflet are available at the Climate Ready website (www.climateready.gov.hk).