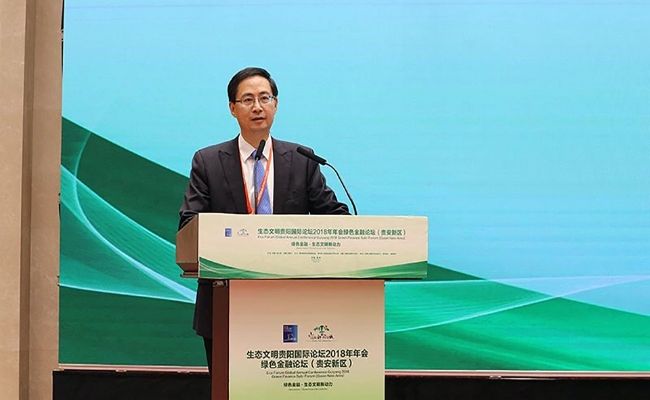 (This article is the keynote speech delivered by the director of the Center for Finance and Development Studies of the National Finance Research Institute of Tsinghua University, the Director of the Green Finance Committee of the China Society for Finance and Banking, Ma Jun, on May 27th 2018, at the International Forum titled Green Finance Supporting Green Development hosted by Shanghai University of Finance and Economics. The content has been reviewed by the author.)

First of all, please allow me to express my sincere congratulations on behalf of the Finance and Development Research Center of Tsinghua University and the Green Finance Committee of the China Society of Finance and Banking on the opening of the Green Finance Forum hosted by Shanghai University of Finance and Economics. As this meeting is an international forum, I would like to introduce some new developments of today’s international cooperation in green finance. I have four focuses: first, the progress of the G20 green (sustainable) finance research group; second, the status quo of the central bank and the supervisors’ green finance network; third, the progress of Sino-British green finance cooperation, and fourth the green investment in the Belt and Road initiative.

In 2016, China, as the rotating presidency of the G20, seized the rare opportunity to incorporate green finance into the G20 agenda. Now we can see it is a very important and wise decision. With the support of the G20 member states, the G20 Green Finance Research Group was established in 2016. I was honored to be assigned as the co-chair of the group on behalf of the People’s Bank of China with Michael Sheren from the Bank of England. In the same year, the G20 Green Finance Research Group proposed seven initiatives to promote the global development of green finance, all of which were written in the G20 Leaders’ Communique of Hangzhou Summit. Before that, G20 leaders, central bank governors, and finance ministers had never discussed green finance collectively. The consensus reached by G20 on the development of green finance was a landmark event.

In 2017, Germany assumed the G20 presidency and decided to continue the green finance issue and the task of the Green Finance Research Group. In this year, G20’s research on green finance became more specific and operational. For instance, to encourage financial institutions to conduct environmental risk analysis. What is environmental risk analysis? Let me give you an example. In 2015, the Industrial and Commercial Bank of China began to conduct an environmental stress test to analyze whether environmental factors or changes in environmental policies (such as the government’s increase in the emission charges) will have impacts on the non-performing rate of bank loans, and how much the impact will be. The result of the analysis tells banks that in order to reduce the risk of default on loans in environmentally high-risk industries, it is necessary to reduce the loans to these industries. In addition, many institutions have conducted stress tests and scenario analysis on environmental risk in insurance industries and the asset management industry. These analyses are beneficial to the reduction of financial instiutions’ investments in polluting or high-carbon industries and the increase of investment on low-carbon green industries.

After reviewing more than a dozen cases of environmental risks in the financial industry, the G20 Green Finance Research Group believes that it is necessary to encourage environmental risk analysis and to further develop international communication and capacity.

This year in 2018, Argentina assumed the G20 presidency and renamed the Green Finance Research Group as the Sustainable Finance Research Group. The name has changed, but the group still focuses on financial support for environmental improvement and fighting climate change, as well as on social benefits of green finance, such as job creation and economic growth etc.

1) Sustainable asset securitization. Banks around the globe hold a large amount of green credit, which is dozens of times the size of the green security market. But institutional investors (including insurance companies, pension funds, sovereign funds, etc.) which manage $100 trillion assets have few channels to invest in green assets. This means that institutional investors have no proper channels to enter the green market. Securitization of green credit is an important means to open the channel. Of course, in a broader sense, we should explore the variety of green security assets, including banks issuing green securities, green asset backed securities, green asset securitization products, green mortgage securitization products, green CLO, and so on.

2) Develop sustainable PE (private equity) and VC (Venture Capital). Many green industries, including the wind industry and solar industry, have long relied on government subsidies. But the government’s financial resources are limited, especially in developing countries. The limited financial subsidies are insufficient to support the large-scale investment needs of energy transition and other green projects. In the future, it is mainly the power of green technology that the green industry can rely on to gain a competitive advantage over non-green industries. Through innovation, we can reduce the cost and enlarge the market of green industry. Therefore, a large amount of green PE and VC is required. In Silicon Valley in the United States and Shenzhen in China, PE and VC’s development is proceeding. But many developing countries have only just begun. In the future, we will promote the development of green PE and VC in the world by developing incubators, strengthening green labeling capabilities, and developing pilot projects etc.

3) The use of financial technology in sustainable finance. At present, green finance is facing a major obstacle, which is the high cost and difficulty in identifying, certifying and labeling green projects, green products and green assets. For example, the certification cost of green securities is significantly holding back the development of the green security market. In the future, it is possible to automate green certification through technologies such as the Internet of Things, big data, and block chain, thereby greatly reducing the impediment to the development of green financial markets. Throughout the world as well as in China there have been some exciting initial attempts, and the prospects are very optimistic.

The Sino-British financial dialogue in the past two years has required the China Green Finance Committee to cooperate with the City of London to promote bilateral cooperation in green finance. For this purpose, the Green Finance Committee and the City of London launched the Sino-British Green Finance Working Group. One of the main tasks of this working group this year is to assist Chinese and British financial institutions in carrying out pilot projects on environmental information disclosure. Currently, ICBC, Industrial Bank, Jiangsu Bank, Huzhou Bank, Huaxia Fund, Efunds, HSBC, Aviva, Brunel, Hermes, a total of ten Chinese and British financial institutions volunteered to participate in the pilot.

Among them, four Chinese banks have issued their three-year plan, promising to disclose the balance of green credit and environmental benefits in the first year  In addition a commitment has been made to disclose the loan balance and environmental impact of polluting industries in the second year, and constantly improve the environment stress testing methods and further increase transparency in disclosure. The British are also preparing to issue an action plan in the near future. I believe that the pilot projects will be an important driving force for the Chinese and British financial industry to disclose environmental information, and will have a profound impact on the development of green finance in the world.

In addition, the Sino-British Green Finance Working Group plans to carry out a number of tasks in promoting the Belt and Road green investment and green asset securitization, analyzing the financial performance of ESG investment, and encouraging green technology.

The Belt and Road countries have a projected annual basic investment demand of 1.5 trillion US dollars in the future, and the total annual investment demand now is as high as 5 trillion US dollars. If these countries continue the traditional, extensive investment and growth model, they would generate a large amount of carbon dioxide and cause severe pollution. In order to achieve the goal of controlling the temperature rise within two degrees Celsius as required by the Paris Agreement, the Belt and Road countries and regions must carry out large-scale green and low-carbon investments as soon as possible.

In order to allow the Belt and Road countries’ investments to go green, the Green Finance Committee in the United Nations and other six associations released “China’s Foreign Investment Environmental Risk Management Initiative” (the “initiative” in September 2017, to encourage Chinese financial institutions and enterprises to strengthen their overseas investment environmental risk management. Following that, the Green Finance Committee issued an operational manual for the Initiative at its annual meeting in April this year to help financial institutions and enterprises gain knowledge of the specific methods and tools to conduct environmental risk analysis in foreign investment.

As a key discussion topic of the Sino-British Green Finance Working Group in 2018, both parties will promote the development of a Belt and Road green investment initiative customized for Chinese and British investors. In the future, the two parties can also cooperate with the United Nations Principles for Responsible Investment (UNPRI) and the “Belt and Road” banks, enhancing publicity of the Belt and Road green investment initiative through a number of institutional investors and banks in these two networks.