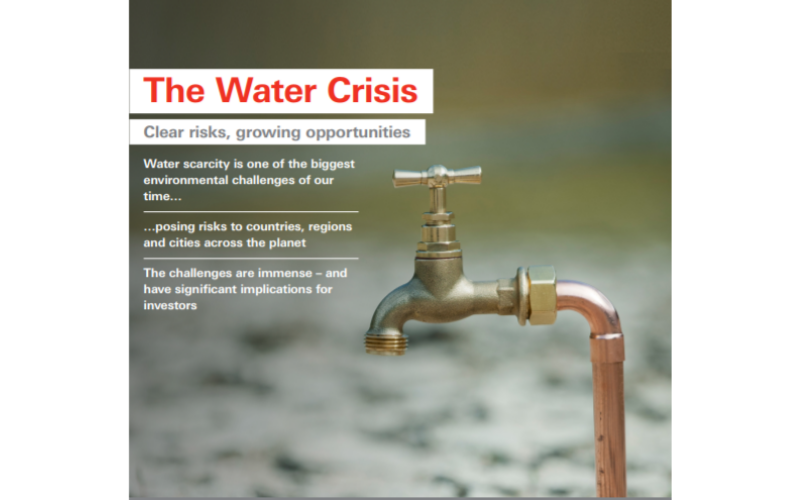 Water covers 70 per cent of our planet but only 3 per cent is freshwater and a mere 0.007 per cent is useable and accessible. And it is not allocated evenly to serve expanding populations, cities and industries.

The combination of climate, demographic, industrial and urbanisation developments points towards the world facing a growing threat from water scarcity unless drastic action is taken now.

Water provides the basis of social, natural and financial capital. So when it becomes scarce, ecosystems, societies and economies can begin to breakdown. And the United Nations estimates that half the world population will be at risk of water stress by 2050.

While some areas have almost no freshwater supply, others have an abundance, potentially exacerbating global inequalities. Climate change is one factor that can disrupt supply, but alongside this, the UN expects global water demand to increase by 20 per cent to 30 per cent by 2050.

Since 2000, some 1.5 billion people have been affected by droughts at an economic cost of around USD125 billion according to the UN, which estimates that 20 per cent of global GDP is produced in areas that suffer from water scarcity but that growth in regions affected by water scarcity could decline by as much as 6 per cent of GDP by 2050, because of the effect on incomes, agricultural output, health and productivity.

We think companies and investors should incorporate water-related risk planning into their decision making. Water risks affect businesses through supply-chain disruption, particularly the technology, agricultural and commodity sectors that rely on water supply.

But the rapid growth of cities, particularly in emerging markets, is not being accompanied by the infrastructure necessary to meet water demand, in our view. In 2018, Cape Town narrowly avoided a ‘day zero’ – when demand would have completely outstripped supply: as water becomes yet more scarce and as cities expand further, such ‘day zero’ near-misses could become more frequent.

Cities dependant on surface water, from lakes and rivers, are vulnerable to pollution affecting supply too. Effective water management and infrastructure will be critical to mitigating these pollution and scarcity risks, involving local-level policies, planning, governance and investments across the entire value chain.

We also think that application of artificial-intelligence and similar technologies in cities – particularly in buildings – could help limit environmental impacts, particularly wastage and water waste.

Desalination – removing salt and other impurities to produce freshwater for human consumption and industry – is becoming widespread. In some small islands and across the Middle East and North Africa, it can provide up to two-thirds of all drinking water.

But desalination has two critical environmental impacts: it generates toxic brine, and is very energy-intensive, which can lead to high emissions if it involves fossil-fuels rather than renewable energy, including solar.

Meanwhile local ecosystems can be damaged if brine seeps into oceans, rivers and lakes. An average 1.5 litres of brine is released for every litre of freshwater produced and the high temperature discharge can lower oxygen levels in oceans and waterways, disrupting animal and plant lifecycles.

The challenges are significant: only with robust water management, strong levels of investment and exploration of new technologies and processes is the world likely to see change. One other potential solution could be treating water as a commodity in its own right: trading water within a well regulated market could potentially help to achieve more efficient outcomes in water allocation and usage.